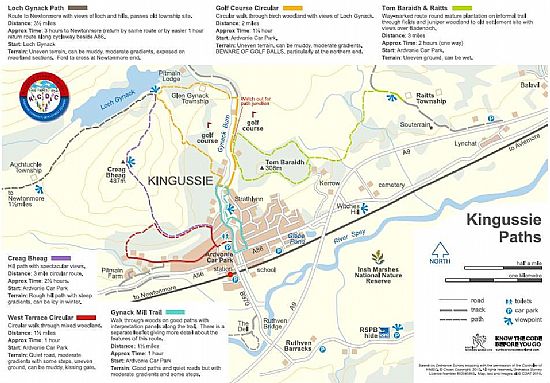 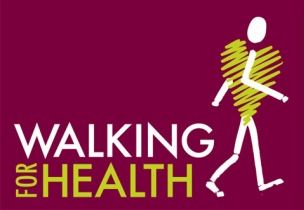 Kingussie and Newtonmore via Loch Gynack

Carn an Fhreiceadain from Kingussie

On the right path

THERE’S been a big push for some years now to encourage more people to exercise by creating community path networks.

One of the most successful ventures is the network around Kingussie. It offers locals and visitors alike the chance to take advantage of an impressive network of well-signed paths in lovely surroundings.

The wee craggy summit of Creag Bheag to the north of Kingussie is at the centre of it all.

It’s only 486 metres high but it provides glorious views of the Cairngorms and Monadhliath, with local landmarks like Kingussie High School and Ruthven Barracks prominent from the top.

A made trail now goes over the hill, linking Kingussie to Loch Gynack. The Kingussie Community Development Company brought about the upgrade and it’s made the walking a lot more pleasurable. After exploring the path network in a couple of trips over the festive season, Boxing Day provided a weather window for a circuit over Creag Bheag, returning to Kingussie.

I started from the Ardvonie car park alongside the Gynack burn, where there’s ample free space and an information board with details of the path network. The beauty of it is that you can link paths together to make a longer walk or just take a short stroll for an hour or so.

From the car park I angled up along the grassy bank leading to a minor road where there’s a signpost for Creag Bheag. Turning right I walked along the road to a track on the left which winds up through woods.

There are several paths leading off at angles but ignore these and stick with the main track to reach a gate in a wall at the border of the plantation. The views open up as you climb higher on the rocky path up the hill.

There’s another signpost shortly after the gate to confirm you are on the right line. I’d reached the snowline by now and followed the ridge along to a small shelter through deep snow in places.

The descent to Loch Gynack down the north-east side of the hill is steeper and needed a bit more care under the snow, with icy patches to contend with.

But I was soon at the lochside, where another signpost points the way west to Newtonmore along the south side of the loch. This is a lovely path that stays close to the loch along the base of Creag Bheag. A trail runner approached – the only other person I saw on the walk - and we exchanged greetings as he ran on, the way I’d come.

In about two kilometres, where the path rises slightly, signposts begin to appear for Newtonmore. I took a track branching left, descending then climbing gradually on to a bank above a burn on the south side of Creag Bheag.

Walking along this in afternoon sunshine I was glad I’d chosen this route for a post-Christmas outing.

The track leads to a gate then down to a point where there’s another gate on the right. Unsure at first about where to go from here I spotted an indistinct path, clearly used by locals, climbing a bank opposite where I was standing, on the other side of a burn.

Crossing the burn I took this path between houses up to a road. Sure enough, just above me was a signpost for the West Terrace Circular walk – also part of the path network.

Turning right along the road I strolled past some fine houses on West Terrace to reach the field above the Ardvonie car park and the end of my circuit. 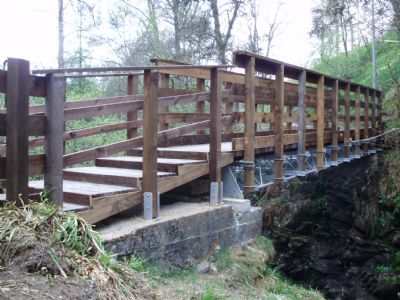 Click on image to open magazine for ramblers
Interactive guide for Munro-bagging
3 Bridges: we are delighted to inform members of the work of COAT in the area.2 bridges are being erected at the Glen Banchor end of the Kingussie/Newtonmore path so well worth a stroll round this weekend or of an evening.
Planning permission  for the new Strathlynn bridge at a slightly, but significant, new position, is being sought( can you include the drawing?)
Training group is finishing off work at Creag Bheag and is going to manage a couple of weeks at the Golfcourse Circular.

Kingussie has a fantastic network of footpaths that has gone from strength to strength.

The expansion of the footpath network, under Andy Dunn’s leadership, is continuing, with the latest improvement seeing the establishment of a Core Path link from L Gynack via Ballachroan Wood to Newtonmore’s Wildcat Trail.  The contractors on the job were severely inconvenienced by the severe weather of last winter, but the eventual path represents an excellent upgrade to its boggy and intermittent predecessor, and has been much used and appreciated over the summer.  It was fitting that the Shinty Club’s sponsored walk earlier in the year was able to use this path for their successful fund-raising event.  Next in the pipeline, through our continued association with Cairngorm outside access trust, should be the replacement of the top bridge at Strathlynn. 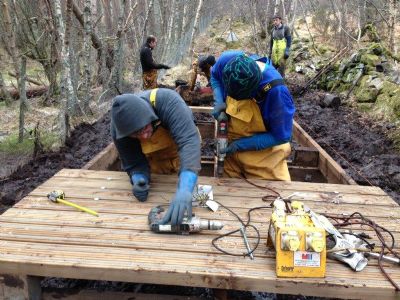 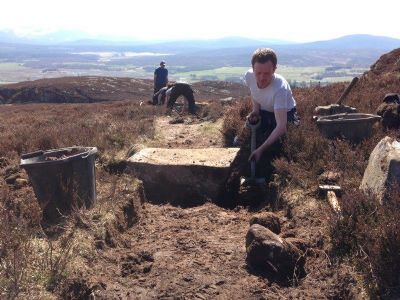 You may have noticed path work happening on Creag Bheag over the last few months. Our current trainees have been busy building boardwalk on the Golf Course Circular and repairing a stretch of eroded path on the south east slop. Meanwhile CWC Ltd, former COAT trainees themselves, have built a new path on the steep North slope.

To celebrate the completion of this work wed like to invite you, and others from your organisations, to join us for a walk over Creag Bheag, where you will get the opportunity to meet our trainees and try out the new paths. We plan to do this on Friday 14th June at 10.30am, meeting at Kingussie Golf Course Car Park, and the walk will take approximately 2 -3 hours.

Please let me know if you are able to join us.
Hope to see you there.
Lizzie

SATURDAY 18 MAY – WALK THE TALKS: Five or more escorted walks lasting 1hr, 2hr, 3 hr, or 5/6 hours – choose whichever suitspecific details will be available in the next two months on poster and website. In the meantime, if you would like any further information, please contact Andy Dunn 01540 661330 ammjendunn@aol.com or any Director of KCDC. Nearer the time there will be a need to check the paths and do some light maintenance work.  Andy would be very pleased to hear from you if you feel you could offer some time to help with this.EEP THE DATE FREE . DO JOIN CELEBRATE  KINGUSSIE’S  FOOTPATHS
JOIN A MINI WALKING FESTIVAL FOR LOCAL RESIDENTS, FRIENDS AND VISITORS. WALK ONE OF KINGUSSIE’S MANY AND VARIED PATHS
KCDC’S CONTRIBUTION TO “KINGUSSIE – A  LITTLE TOWN OF FESTIVALSNorwegian Visit – 26 September 2012

The visit went well. Iain Dyce, Donnie Grant and Andy Dunn escorted the group from Oppland National Park in Norway through the town via the Mill Trail, explaining our aspirations for the hydro scheme, the biodiversity woodland, and the paths network.

At present the Norwegian view of what a national park should be has a focus on biodiversity and conservation, while the CNP view includes, in addition to these two factors, socio-economic regeneration.

Community regeneration and involvement of volunteer organisations such as KCDC, as well as COAT and LOAF, are a novel theme for Norwegians. Our discussion touched on the possible tensions between conservation and socio-economic regeneration, and how these might be resolved.

An unexpected connection between Kingussie and Oppland emerged when two of the Norwegians recalled, as kids, waving at a group of kilted, bagpipe-playing Scotsmen marching through their village.  One of our group of three was a member of that kilted band.  Which one, I wonder!

Weather or Not! (Tuesday 25 September)

Despite wild and stormy weather, members of KCDC and pupils and staff from Kingussie High School sallied forth to learn about path use and biodiversity woodlands.  Pupils mapped paths and identified species of plants and trees as well as making a very useful contribution to woodland maintenance.
It is hoped that this might be the first move encouraging links between school and community in relation to knowledge and understanding of their local environment.  The photo shows pupils back in the classroom at the end of the day out of the rain, identifying indigenous species.

Of the three sub-groups of KCDC – Hydro, Biodiversity and Paths – the greatest emphasis currently is on the Hydro scheme.

HYDRO
The project using the Archmedes screw has had to be abandoned because of a shortfall in funding and pressure from the timescale needed to complete the project. However, the sub-group is currently pursuing the possibility of a project using standard turbines.  The agreement of Pitmain Estate to include our project alongside its own two hydro schemes proposed for 2013, and the possible use of its consultants to facilitate the building of the KCDC hydro scheme, would reduce our costs considerably.

The full implications of this will be discussed at this year’s KCDC AGM on November 14 when members will be asked to vote on the viability of continuing with this project.

BIODIVERSITY
Since our last AGM, ownership of the woodland has been transferred to KCDC. This extends on both sides of the Gynack from the footbridge at the Cross Restaurant upstream to the bottom end of the Golf Club car park. Daval’s legal expenses were paid  by a Forestry grant and those of KCDC pro bono Fraser Nicol, for which many thanks are due.

The woodland is now being managed as native woodland and for biodiversity. To this end we have been removing seedling sycamores as they appear, removing the re-growth of sycamore stumps, controlling the bracken and tidying the brash following the removal of the sycamores. It is intended to retain deadwood, where possible, to improve the woodland ecosystem.

Several favourable comments have been received about the multitude of flowers adorning the woodland floor this spring as a result of more light getting in.

We are hopeful of having help from some High School pupils in the near future to cut back the invasive snowberry and to carry out general maintenance.

Next month it is hope to resurrect some small-scale coppicing of hazel trees.  There is evidence to suggest that this practice was carried out many years ago.  This will increase the biodiversity of the woodland.  It is proposed that volunteers from our membership might be deployed for this activity at a date yet to be decided.

PATHS
A further four paths have been suggested to the CNP via Kingussie Community Council to be classified as core paths – Raitts; Auchtuchle to West Terrace; Tromie Tramp; a possible pedestrian connection between Lynchat and Kingussie.

We are aware that the popular usage of our paths network has brought issues of maintenance. With this in mind, we are allocating a path each to individual members to monitor and check. Workers from the Community Service Scheme will be giving us time for some path maintenance in the autumn. The new group of trainees with COAT are also scheduled to work in our area sometime soon. They have already built up and improved the path around the duckpond and plan to build a boardwalk in the boggy area en route to the climbing crags.

New information signage will be created by the CNP in the town to indicate the different levels and categories of walks available locally – Town, Mill, Hill. In addition, we now have draft proposals for new fingerposts throughout the paths network.

I hope that this keeps you up to date with some of what is going on with KCDC.  If you have any comments or suggestions, please contact any KCDC board members.

Duncan has kindly offered to help with healthwalks if he is free on occasions.